Can the Red Bulls fend off a a hungry Sporting Kansas City side for their third win of the season?

Coming off a refreshing win over arch-nemesis D.C. United, the Red Bulls head into week eight of MLS action with a two game homestand- Wednesday, versus Sporting Kansas City, and Saturday, versus the New England Revolution. These are not necessarily must-wins this early on in the season, but rather would-like-to-wins, or it-would-be-nice-to-get-three-points-wins, especially considering our games-in-hand ratio versus other Eastern Conference teams.

With all the talent, glitz, and glamour on the Red Bulls' high-priced roster, six points from two home games is certainly achievable, but not set in stone. Mind you, beating Sporting is no easy task. The Red Bulls' only victory over Sporting since they rebranded came in 2011, off a goal from the dearly-departed Luke Rodgers. The two-time Eastern Conference champions have gotten off to a strong 2013 campaign, boasting a 2-1-3 record and a +4 goal differential. Look for DP striker Claudio Bieler to spearhead the attack in a 4-4-3 formation, off service from Graham Zusi and C.J. Sapong as outside wingers. Paulo Nagamura and Oriol Rosell should command the center of the park and try to limit dangerous attacks from the Brazilian Juninho. Rounding off the lineup will most likely be Aurelien Collin and Matt Besler in central defense, with Seth Sinovic and Chance Myers acting as fullbacks. Even Thierry Henry conceded that Sporting has the "best partnership at the back in MLS"- of course, referring to the defense that has only given up three goals in six games.

On the opposite end of the field, head coach Mike Petke has quite a few options to choose from. Having completed one of a string of three games in the span of eight days, he has to decide whether to rest a few starters or to stick with the best possible lineup at the expense of fatigue. With that said, look for Tim Cahill and Fabian Espindola as strikers in a 4-4-2 set-up, with Johnny Steele and Eric Alexander acting as outside midfielders. In all probability, Petke will designate Juninho as a true #10 role, and Dax McCarty as a defensive midfielder supporting him. In defense, the left back spot is still up for grabs between Roy Miller, Heath Pearce, and Kosuke Kimura. Brandon Barklage should slide in as a right back in his second game back from suspension, while Jamison Olave and Markus Holgersson will sit in central defense.

I expect the Red Bulls to trot out this lineup: 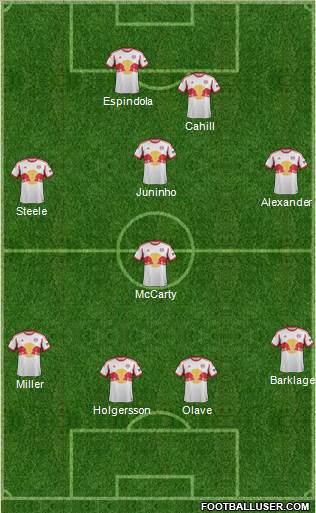 Which Red Bulls' side we see performance-wise really depends on a few key factors- namely, cohesion in the back four and aggression going forward. The Red Bulls' best performance of the season, at RFK Stadium, was primarily a result of Olave and Holgersson 'Hulk' gelling together: covering for each other when the other went forward, good communication, and strong awareness of where the other was with respect to D.C.'s attackers and the ball. If the Red Bulls can replicate that performance, it makes the elusive win much easier. On the other side of the ball, it truly depends if Thierry Henry is up to starting or Petke deploys him as a substitute. Henry has the individual capabilities and the workethic to orchestrate the Red Bulls attack, as we have seen time and time again. Should Henry not start, then the team must rely on Juninho and Espindola to provide a much-needed creative spark. Petke should also look to capitalize on the team's aerial capabilities, not only off set-pieces, but also off open-play attacks. If Roy Miller and Brandon Barklage can overlap Steele and Alexander on the wings and deliver in crosses, all Cahill needs to do is put two and two together and head/volley the ball into the back of the net (which, surprisingly, he hasn't been doing in recent games.)

If the Red Bulls can bring it together and dictate the flow of the game, then they should be well-off. Then again, don't get your hopes up if they jump out to an early lead- closing out games has been a problem for them, which Petke hopefully has (successfully) addressed. With all said and done, I'm predicting a 1-1 draw, Espindola notching one in the 32nd minute, and Bieler in the 75th. All we can do is hope for the best...