The Red Bulls are looking like they need to make some like up changes, and we here at Once a Metro have some ideas.

Share All sharing options for: Wherein Your Intrepid Once a Metro Staff Takes Over the Red Bulls' Back Room

Mike Petke might be sheepish on making changes to his preferred XI heading into the weekend's rivalry match-up with D.C. United, but we here at Once a Metro aren't. What would we do? Find out below. 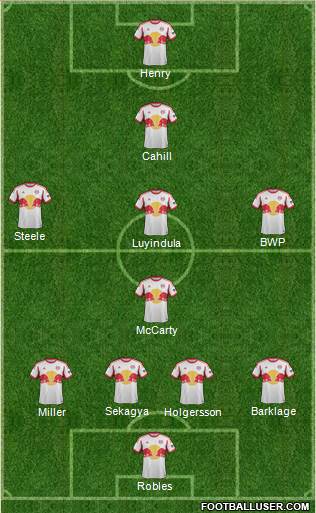 I think it's time to scrap the traditional 4-4-2 and go with something just a tad different. As evidenced by last Sunday's match against Chivas and even against Philadelphia two weeks ago, the Red Bulls have been figured out. If they go with something like this 4-4-1-1, it will let them keep their basic defensive shape while forcing Dax McCarty to stay back at the true destroyer role where he plays his best. It also brings enough change to the attack to force other teams into a double take. I'm not a big fan of shaking up the back line too much, but if Roy Miller is still unable to play due to injury, I wouldn't mind seeing David Carney fill in at left back.

As for my picks up front, hear me out. I know everyone is just about done with Peguy Luyindula, but I think the hate has gone too far. Sure, he needs a lesson or twelve on finishing, but the rest of his game has been sound. His passing is stellar, he has good vision on the ball and he's got an eye for making plays...so why not give him a shot at the CAM role. It plays to his displayed strengths and takes all the pressure to score off of his shoulders. What better chance to try something risky than against a flat out terrible DC United?

Keeping Thierry Henry as a lone striker up top will prevent him from dropping back, while Tim Cahill can resume his natural role as a withdrawn forward, freeing him up to attack the box and track back as he sees fit. That gives Bradley Wright-Phillips the chance to tear up the right and occasionally drift inside to act as a third forward when need be. Finally, I've been pleased with Jonny Steele this season. Sure, his last few matches haven't been great but he's serviceable, and with the boosted attack in the middle of the field, he'll be allowed to stay on the wing and deliver crosses into the box without worrying about trying to make something happen. 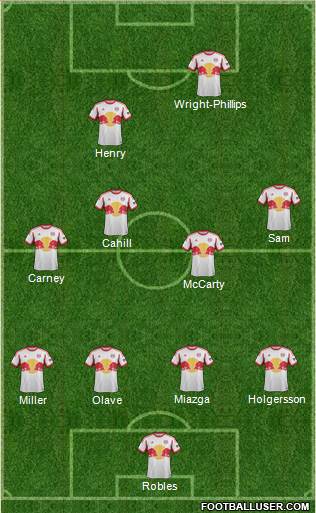 My starting 11 has major shakeups with 4 non-starters getting the nod.

Starting from the back. Ibrahim Sekagya is out for his stupid challenge at Chivas USA. Aside from giving Chivas the lead going into the half, it was just a stupid move, probably out of frustration. He needs to learn he can't do that on this team. Markus Holgersson moves out to the right, like he was against Philadelphia, to make room for Matt Miazga. I'm giving the 18 year old academy product a start because the old guys just aren't doing a great job recently. Roy Miller gets to keep his spot because he's been playing fairly well, and Jamison Olave returns from injury this week.

In the middle, Dax McCarty and Tim Cahill stay for obvious reasons, but Eric Alexander and Jonny Steele are out. Aside from them both having played a lot this year, they don't provide a lot of speed and haven't provided good crosses this year; something that has not gone unnoticed by other teams (see Union match). Instead, I give Lloyd Sam a start on the left because of his speed, and I give recent signing David Carney a start because of his partnership with Cahill for the Australian national team. Carney can also get back and play defense which would allow for Roy Miller, who has shown promise in the attack, to move into the final third without leaving the right side vulnerable.

Up front, Thierry Henry plays in a slightly withdrawn role with Brandon Wright-Phillips up top. Wright-Phillips gets the start because Fabian Espindola and Peguy Luyindula haven't shown they deserve the starting spot. Also, when he came on against Chivas, he was the only one who seemed to care and actually put pressure on Dan Kennedy. 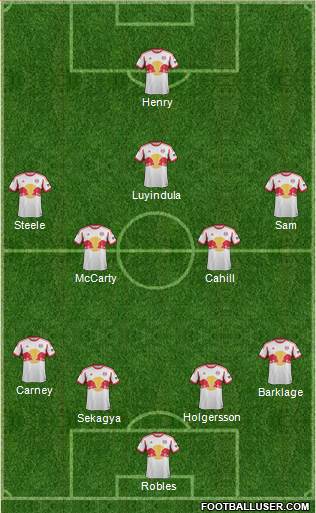 No huge changes for me. Same goalkeeper, pretty much the same backline, save David Carney, who fills in for Roy Miller, as there's no real reason to rush Jamison Olave or Roy Miller back from injury.

The shake up comes in midfield. Lloyd Sam (finally) gets the nod as he brings more attacking flair than Eric Alexander. Safe? No. But you can't win if you don't score.

The other big change is Peguy Luyindula as a withdrawn striker/attacking midfielder. No, Luyindula isn't a great striker, but there's a three-way tie for the lead in goals scored and another two have four goals scored. But this line-up has scored 24 of the Red Bulls' 37 goals. In this role, Luyindula won't have to finish, he'll just do the things he does well: pass, hold up the ball, find open teammates, work hard, outsmart the opposition.

He slots in behind Thierry Henry to keep Henry closer to goal. If Luyindula can get the ball at his feet, find other players, and spark some attacking movement, he's done his job.

Defensively? Luyindula already has a pretty good work rate, but with Cahill doing his box-to-box thing, and McCarty taking on a more defensive role, the Red Bulls should have the central midfield locked down.

What's your line-up for Saturday?