Win Over D.C. United is Good, but More is Needed

The NY Red Bulls beat D.C. United 2-1 on Saturday, but they need to show more to prove they are playoff worthy.

Share All sharing options for: Win Over D.C. United is Good, but More is Needed

Saturday saw an announced attendance of 17,372 bear witness to the New York Red Bulls beat D.C. United by a 2-1 scoreline, and New York winning the 2013 Atlantic Cup. Isn't that exciting? One could be forgiven for not knowing and/or caring about the Mid-Atlantic's version of the Cascadia Cup. Red Bull fans had a bigger issue on their minds; namely, the Red Bulls making the playoffs.

Going into the D.C. game New York sat, by only the grace of MLS "parity", 2nd in the East, 3 points clear of 6th place. They were coming off of three straight games without a win (2-0 loss at Columbus, 0-0 draw vs Philadelphia, 3-2 loss at Chivas). Roy Miller apparently had an injury going into the Chivas game. Jamison Olave was still lingering with an injury of his own. Thierry Henry, without any apparent injury, was benched in what was called a "coaches decision" after a midweek scuffle with Mike Petke. Here is the formation Petke ran out onto the field: 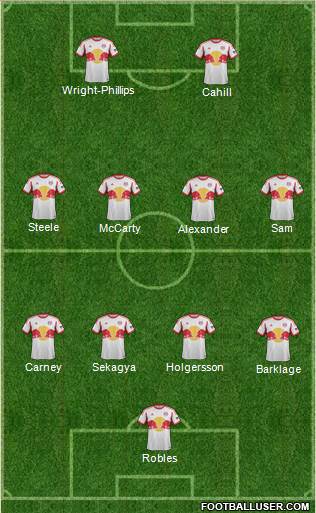 Injuries played a part in the formation, and hopefully some of the snubs were meant to send a message. The team went out and rewarded Petke with 2 goals and a win, with NY now sitting 5 points clear of 6th place, and remaining in 2nd, tied with the Montreal Impact and Sporting Kansas City on points.

However, the performance against D.C. wasn't what this team needed. From my view in Section 103, the team seemed to play OK, but didn't press the issue with last in MLS D.C. Yes, they scored 2 goals, but one was with a lucky bounce off of Bill Hamid, and one was a Cahill header, which Hamid should have saved. They seemed timid at times, and weren't able to control the ball as much as they should have (54.1% possession). The referee played a part in it, calling 5 more fouls on NY (15) than DC (10), but that has been an issue across all of MLS this year.

If NY really wants to be a serious contender for MLS Cup though, they need to not just beat teams like D.C., they need to absolutely destroy them. There is no reason for a team that scored all of 15 goals all season (and 0 in the previous 2 games against NY) to score at all.

Out of their last 7 games, only 2 of them feature a team currently in a playoff position, and none of the 6 teams (Houston Dynamo, Toronto FC, FC Dallas, Seattle Sounders, New England Revolution, & Chicago Fire) have better records than the Red Bulls. They won't go perfect the rest of the way though because that's how this team rolls. Although, if Petke and the team want to prove they are ready to finally ready to take that last step that this franchise has been waiting to take since 1996; they can start to prove it by dominating Houston and the rest of their schedule through October.