Do you get on the PATH at World Trade Center to get to Red Bull Arena? For 2014, you're going to have to figure out a new route.

Share All sharing options for: Plan Alternate Route: PATH Construction to Cause Problems for City-Living Fans

Really, getting t0 Red Bull Arena isn't as hard as many would have you believe.

There's the PATH, which has stations both on 33rd Street and near the World Trade Center, which drops you off, quite literally, at the Arena's doorstep. Then, there's NJ Transit out of Penn Station, a 15- to 20-minute ride that leaves you off at Newark Penn Station and the Market Street supporters' bars.

It's really not all that difficult, at least not as hard as the detractors will have you believe.

But don't expect them to change their tune in 2014.

The Wall Street Journal is reporting the stretch of the PATH from World Trade Center to Exchange Place will shut down on 45 weekends in 2014 while the Port Authority works to modernize the system and repair the damage left by Sandy.

Meaning anyone who takes the PATH out of World Trade Center -- so any Red Bulls fan out of Brooklyn or lower Manhattan -- will have to jump on the PATH at Christopher Street, 9th Street, 14th Street, 23rd Street or 33rd Street before changing at Journal Square for Harrison and Red Bull Arena for weekend games.

For those more visually-inclined, the Gothamist's Dan Dickinson made this handy map: 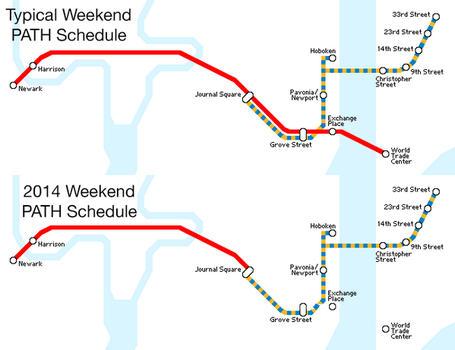 That might not seem like the biggest change -- hell, fans from further uptown, Queens, Westchester and Connecticut already do it -- but the change hurts the Red Bulls' chances of converting Brooklynites into anything more than casual fans (if that). And let's remember: Major League Soccer's post popular demographic is 20- and 30-somethings with disposable income, the sort of people who live in that borough.

And ignoring the borough-based stereotypes, you're asking people who used to have to transfer once or twice to transfer at least three times. What was once something of a pleasant ride to a world-class soccer stadium is now a sojourn into post-industrial New Jersey.

To make things worse: there are no weekend home games against the Philadelphia Union or D.C. United.

So, yeah, despite the front office making the right moves, there's reason to be concerned about attendance in 2014.