Yes, That Was the Red Bulls' 2014 Secondary Jersey

That Footy Headlines guy seems to know what he's talking about...

Share All sharing options for: Yes, That Was the Red Bulls' 2014 Secondary Jersey

That blue Red Bulls' jersey with the yellow stripes we posted last week?

It looks like that will be what the team will wear away from home this season.

Dave Martinez, the proprietor of Empire of Soccer, posted photos of the jersey from tonight's season ticket holder event, and it's pretty much exactly what Footy Headlines leaked last week. 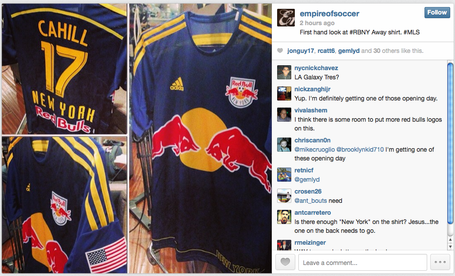 The yellow shorts were a unique addition when they pulled them on nearly three years ago at the Emirates Cup, so adding more yellow is a nice idea, especially given the design constraints the team is working with. Also a nice touch: The "New York" hovering above "Red Bulls" on the back. It makes the team feel more local, rather than part of a worldwide sports conglomerate, which gives everyone warm and fuzzy feelings. It does, however, clutter the back of the shirt. But you take what you can get.

Footy Headlines -- whose source seems pretty damn legit at this point -- also said these jerseys would be worm with the yellow shorts.