The Red Bulls have been one of MLS' best clubs for two years now. They're not a mystery to most fans. But dig into the numbers, and the Red Bulls look stranger and stranger.

Share All sharing options for: MLS Statistical Preview: The Mystery of the New York Red Bulls

Last season the New York Red Bulls earned the Supporters' Shield in MLS, winning half of their 34 matches and outscoring their opponents 58-41. This followed on the back of a highly successful 2012 season in which the Red Bulls came third in the Eastern Conference with 57 points, just two behind their total in the next season. They seem the portrait of a top-quality MLS club.

But the stats underlying their performance are harder to figure. In 2012, the Red Bulls took 30 fewer shots than their opponents. This was not a case where the Red Bulls were getting into better positions and denying such chances to their opponents. Their shot difference was even worse in the "Danger Zone," the central area of the 18-yard-box from where most goals are scored. If you had asked me after the 2012 season which MLS team would be most likely to fall back to the pack in the next season, I would have had the Red Bulls near the top of my list.

So what are these underlying statistics that the Red Bulls keep outplaying? As Richard Whittall writes, recent studies in soccer statistics have focused on one key idea, that shot conversion rates are prone to wide and random swings. If a team has scored ten goals on only fifteen shots, whatever the context of those goals, it's very unlikely they can maintain that rate of conversion in the future.

Does this mean all shots are equal? Obviously that cannot be right. Shots taken from the center of the six-yard box are obviously better chances than speculative attempts from thirty yards. To account for chance quality, we need to log the location of shots taken, as well as other pertinent information. Was the shot taken with the head or the foot? Was it assisted by a through-ball or a cross? Was it a direct free kick? These characteristics, the quality and volume of shots created, are much more persistent at the team level. So the shots a club creates or allowed, adjusted for the quality of these chances, tells us a lot about how well that club is likely to play in the future. They can be summarized in one handy statistic, "expected goals," which adds together the typical values of every shot the club attempts.

In the case of New York, of course, the statistics did not predict anything like their 2013 season. Is the problem that these numbers don't work in MLS? I have only two seasons of data at this point, so it is possible, but I found that no other clubs in MLS showed a pattern of over-performing or under-performing expected goals. That is, of the 19 teams in MLS, the Red Bulls are the only one to show this trait. Everyone else, from 2012 to 2013, roughly regressed to the mean. 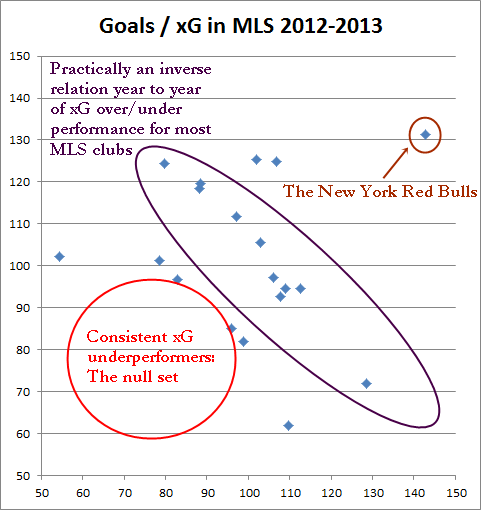 So if something needs to be expained, it's probably what New York are doing. I've gone through a few possible theories, and I do not find any of them terribly convincing.

Is it Thierry Henry?

The Red Bulls have a former Ballon d'Or runner-up playing forward. He's pretty good. One plausible theory is that a whole bunch of the Red Bulls' shots are taken by Thierry Henry, and Thierry Henry is much more likely to convert his chances than the average MLS forward.

The Henry theory would have been a possible explanation in 2012, although even there it's only part of the issue. Henry and strike partner Kenny Cooper were dead-eyed assassins that year, scoring 30 non-penalty goals combined. Based on the locations of the shots they attempted, they would have been expected to score about 15 goals. So in 2012, it was Henry's and Cooper's shot conversion which carried the Red Bull attack.

Last season, however, Henry had the stats of a much more normal MLS striker. He scored 10 non-penalty goals from 92 shots after scoring 15 from 88 the year before. Instead, for the 2013 Red Bulls the excellent finishing was distributed throughout the club. Tim Cahill led the finishing with 11 goals from chances that projected to only about six goals scored. Fabian Espindola, Eric Alexander and Dax McCarty scored 15 non-penalty goals between then on 102 shots. Basically, they combined to produce the numbers of 2012 Thierry Henry. And then you have the ridiculous season of Lloyd Sam. He scored five goals on seven shots.

The Red Bulls consistently showed excellent finishing quality in both seasons, but the arrangement was very different. Instead of having two strikers converting their chances at a fantastic rate, it was mostly the midfielders who carried the club's statistics. This does not mean there isn't something special about Thierry Henry's right foot, but I would have liked a more obvious pattern of Henry-dependent finishing.

Is it a Tactical Innovation?

This one is hard to support, as well. The Red Bulls changed coaches between 2012 and 2013. Mike Petke appears to be a capable coach and a good man-manager, but nothing he did in his solid but mostly traditional 4-4-2 suggests tactics which would create such outlying numbers. Barcelona are only club in European football which consistently outplays their expected goals in the way New York have recently. Perhaps to be an outlier in MLS does not require the kind of tactical peculiarity it takes in European football, but still this gives me pause in attributing to the Red Bulls some peculiar tactical innovation that allows them to finish their chances at an unexpectedly high rate.

Still, the underlying stats of the 2013 Red Bulls do reflect signficant tactical changes, all of which point in a positive direction. I mentioned that the Red Bulls were outshot in 2013. As I said, this is a highly misleading stat, for the Red Bulls allowed the highest proportion of shots from outside the box in MLS.  They released their defensive pressure in the areas 20 yards or more from the goal, but tightened up to prevent shots from the most dangerous areas. You can see the effects of Petke's tactical improvements in the club's shot distributions both for and against.

The statistics of the Petke Red Bulls display his preferred tactics quite clearly. This is a club willing to give up low-expectation shots in order to defend deep and prevent big chances. Likewise, Petke had his club cut down on long-range sniping to focus on getting the ball into the danger zone. (For more of these statistics, you can see my MLS advanced statistics page.)

It is possible that Petke's tactics not only translated into better shot locations, but also into better shots in a way that is not comprehended by the statistics. I am not saying I expect the Red Bulls to outperform their underlying stats for a third consecutive season, but if they do, this might be the cause.

A Good Not Great Club?

My tendency, as an anaylst, is to discount the possibility of massive outliers without rejecting them. The Red Bulls might be breaking the underlying stats. Football statistics, as a field, is still very young, and there are any number of important issues which the statistics cannot comprehend. So I am open to the possibility. But the New York Red Bulls, to me, are not a tremendously compelling case of a likely outlier. They look more like a good, not great club which has improved, no doubt, but which is not yet a world-beating side.

The underlying stats for the Red Bulls in 2012, summarized in the table above, were simply not all that good. In 2013, they improved to solidly above average. It did not take quite as much overperformance of expected goals in 2013 to get the Red Bulls into first place as it has taken in 2012 to earn them third. Even if Petke's tactics did not create a sustainably amazing goal-scoring machine, he did get the club to outshoot their opponents by 40 from the danger zone. Those are the numbers of a competitive side, and at the very least that's what the 2014 Red Bulls ought to be.