RBNY found a novel way to get everyone's mind off the team's distressing CCL failures...

If you visited RBNY's Twitter page on the evening of Thursday, September 25, you may have seen something like this: 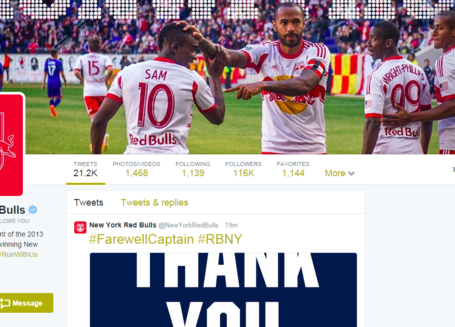 We can be sure the Red Bulls' marketing department dearly wants to celebrate the captain's retirement and sell a whole bunch of tickets to the great man's last few games in New York, but a couple of social media posts on a dreary weekday evening seems an odd way to start the campaign.

So that's it then. One of the best players the club has ever seen, its captain for its only (to date) trophy-winning season in its history, its second-highest goal scorer of all time, and all-time leading assist-provider gets to be the first player in the team's history to be retired by its social media account.

Or not. Turns out the #FarewellCaptain hashtag is a tribute to another New York sports icon with a 20-year history of greatness in his sport. And a lot of companies decided to ride the hype train for some cheap exposure on Derek Jeter's coattails, if Jeter wears coats with tails.

He probably hasn't done his own laundry in a while:

RBNY's was by no means the most incongruous online tribute to Jeter. But it may have been the most (deliberately?) ambiguous.

No crime in paying respect to a New York sporting legend.

Might have been helpful to remember you're a sports club with a legend of your own on the books. Who has been a pro for two decades. And is your captain. And may shortly be saying farewell.

Love ya, RBNY, you reckless, crazy tease you.