It's simple: Bradley Wright-Phillips carries too much of the goal scoring burden for the New York Red Bulls. That was on full display in this yer's dismal playoff showing against the Montreal Impact. To solve this, I've created a lineup for the Red Bulls using their current roster to score more goals. It is effectively a 3-5-2 but its shape looks more like a 3-2-3-2 with a triangle in the midfield. 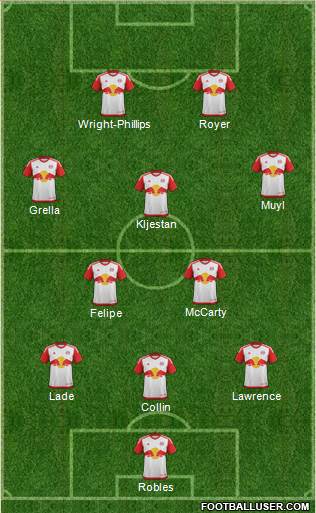 I'm sure this will draw a lot of heat because it only uses three defenders in the back, but I've seen a lot of talk about taking the burden off of Wright-Phillips and I think this lineup would do so. That doesn't mean it comes without its pitfalls. This lineup would score A LOT of goals. So too would it concede A LOT of goals. But in Luis Robles, the Red Bulls have one of the top American goalkeepers, so this formation could work because he makes all the saves he should and a lot that he shouldn't.

This lineup raises many questions though. First and foremost, I wonder how Alex Muyl would be affected playing in this situation. Muyl has been praised for his work-rate and the Red Bulls were so confident in him they traded away franchise mainstay Lloyd Sam to DC United so he could consistently crack the starting eleven. My concern is that this lineup might stifle him as Daniel Royer would effectively take his place in the attack. The defense would also have issues to address in this lineup. This lineup is fully contingent on Connor Lade reaching full health and becoming the player he was last year. If that's the case, he could really create problems for opponents. If Lade isn't the same, however, this formation falls apart. Aurélien Collin is the best defender the Red Bulls have in my opinion, which is why he gets the nod as the lone center back. Unfortunately this means Damien Perrinelle, Ronald Zubar, and Gideon Baah are riding the pine. Sal Zizzo is still stuck behind Kemar Lawrence, which already appears to be the case. With this formation, the Red Bulls could take the lead and sub out Felipe or Dax McCarty for Zubar or Perrinelle and bunker down and defend, assuming they could actually close out two goal leads. In this lineup the Red Bulls would suddenly have a wealth of defenders, and someone would very quickly become the odd man out. My guess is it would be Baah as the team has stronger loyalty to Zubar and Perrinelle.

Being so loaded in the front means this team could really raise hell on the counter-attack, assuming they can create turnovers in the midfield. Felipe and McCarty would have to play extremely defensive roles for this to happen, but if they can cause mistakes and turnovers, then get the ball upfield to the top five, they'd terrorize opposing defenses.

The point is this: you want goal-scoring help for BWP, here it is. Royer has shown a penchant for causing problems in his limited MLS action, and I think he'll only continue his upward trajectory. Off the bench, Gonzalo Veron would be the top option. After that, you have Omer Damari and Shaun Wright-Phillips.

Again, it's so early to speculate, but using this current roster, I think this would be one way to take the load off of BWP. After him, no one else scored ten goals this year. If Wright-Phillips and Royer could both score fifteen goals, this team would be far improved than they currently are. Unfortunately, Montreal showed that if you can get BWP off his game, you don't have to worry about anyone else. With this lineup, defenses would have their hands full though, and taking both Royer and Wright-Phillips out of the game would prove to be a difficult task. This team would have a dual-threat up from that could really enjoy success, similar to what Toronto FC are doing right now with Sebastian Giovinco and Jozy Altidore. If the Red Bulls want an internal solution to help Bradley Wright-Phillips, this might be one option to consider.